The Lowcountry has its own happy dance, and it goes by the name of “shag.” 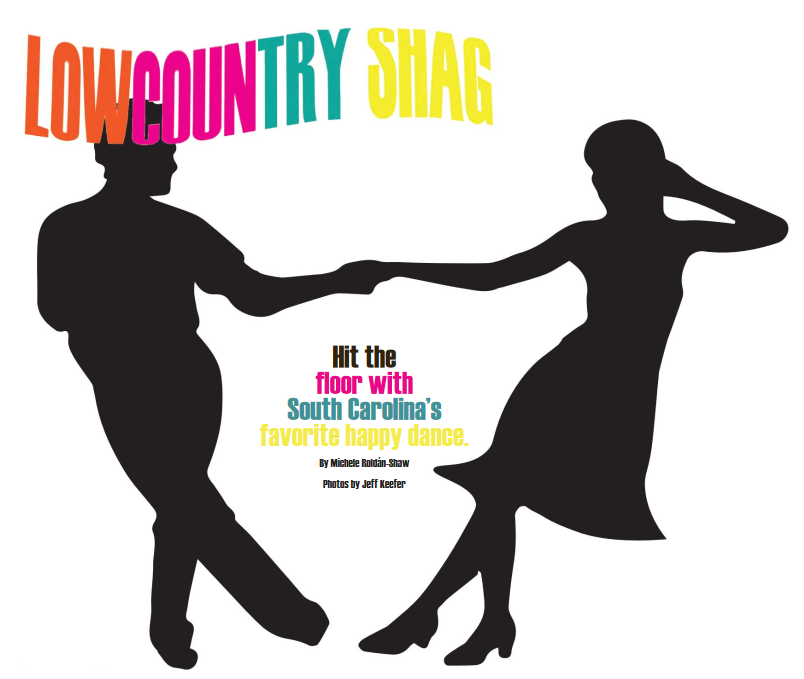 During the summers of the ’40s and ’50s, teenagers vacationing in Carolina beach towns with their families would  meet at beach pavilions and promenades. They played forbidden music on the jukebox and invented their own daring steps.

Now, those same teens have kids, grandkids and even great-grandkids of their own—but they’re still dancing the shag. In fact, it has been named the Official State Dance of South Carolina.

“It’s like a swing dance to bluesy, R&B beach music,” explained Becky Elliot, president of the Hilton Head Carolina Shag Club. “What made it special to the South was that it’s so hot here, people were doing these smaller, more understated moves, hesitations and things like that. They weren’t jumpin’ and jivin’ all over the floor like people up North doing the jitterbug.”

One day, she was walking through the former Crowne Plaza on Hilton Head and saw a poster advertising the Shag Club’s meetings there. After looking in the door of a ballroom to see hundreds of people moving to this irresistible rhythm, she signed up for lessons. It was a bit of a struggle to learn, Elliott admits, but she hasn’t quit shagging since.

“Our mission, as written in the bylaws, promotes shag dancing and beach music,” said Elliott. “We do that by meeting, teaching people who want to learn and hosting events. But it has become a social dance club because it creates a community of people who have something in common. You join because you love music and dance, but then you meet people from all over and you get to know about their lives. You can go anywhere in the shag network and see the same friends repeatedly. It has a family feeling that just pulls you in and hugs you and fills your life with joy.”

In its original heyday, Southern-style swing was danced all up and down the Atlantic seaboard from Virginia to Florida.

Historians pinpoint Myrtle Beach as its epicenter. No one knows exactly how or when the term “shag” originated, but as a movement it dates back to the Segregation Era. Fun-loving, uninhibited white teenagers began “hopping the Jim Crow rope” to watch dancers in black nightclubs. Later, they adapted the moves into their own social circles and convinced white jukebox owners to start incorporating R&B into their playlists.

Eventually, these youngsters went off to college and, as music trends evolved, the shag died out for awhile…but not forever. It was resurrected several decades later by people wanting to relive the old day. In some Carolina families considered it a tradition and passed it down through generations.

There are at least 100 shag clubs all over the Southeast. Clubs exist as far north as Baltimore and New Jersey, and as far west as Pennsylvania and Ohio. Even major urban centers like Atlanta and Memphis have shag clubs. Competition teams take shag all over the world, and “junior shaggers” are keeping it alive for years to come.

“Old-time dancers are the best to watch,” said Becky.

But fes Hilton Head club members date back to the original Carolina shag era. “They have so much finesse. It looks like they’re just steppin’ real slow, but they’re doing all these subtle things and expressing themselves in the dance. Back in the old days, if you invented a step, it was your own and other people weren’t supposed to do it. There was a lot of swagger. It was a male-led dance, and the girls just kept time and gave them a partner. Now, it has evolved to be more equal.”

In the 1989 film, Shag: The Movie, four young women take off to the coast for a wild bachelorette weekend. Filmed in Myrtle Beach, it became a classic coming-age-movie for Southern belles and wannabes, and was recently listed by Garden & Gun as one of the top 10 Southern movies of all time. Beaufort residents Lanier Laney and Terry Sweeney—both former writers for Saturday Night Live co-wrote the movie. Sweeney’s memories of vacationing on Pawley’s Island inspired the movie. Laney desired to combat negative stereotypes about the South that he encountered up North.

Today, the dance is mostly the domain of retirees.

However, Elliot says they are always recruiting junior shaggers to keep the tradition going strong. She’s grateful to Hilton Head Plantation for being one of the last local establishments to have a ballroom dance floor, in the Dolphin Head Golf Club where the Carolina shaggers meet regularly.

“We just want to enjoy life and have fun,” said Elliott. “And when we hear good music, our feet take us along for the ride.”