The first time I saw snow was in December of 1989.

Due to the fact that there are no hills in Bluffton, four-wheelers pulled tubes and hydro-slides attached to ski ropes. Thrilled teens sailed through three inches of snow covering dirt roads. It melted quickly and effortlessly.

This time, I’m 43 and own a house with the potential for bursting pipes, heavy snow-laden oak limbs overhead and a car with no garage. It was not as fun as I remembered, and it lasted a week!

The Weather Channel called it Winter Storm Grayson, named for effect. Meteorologists called it a “bomb cyclone” and “weather bomb,” using the term “bombogenesis.” I call it “the second time I have ever seen snow and hopefully the last!”

Call it whatever you want.

The January 2018 East Coast winter storm resulted from the collision of a low-pressure cyclone drawing cold air from the Arctic into the Lower 48, where it met warmer air hovering over the Gulf Stream. Such a “difference of opinion” or tight temperature gradient caused a sudden drop in atmospheric pressure. “Bombogenesis” takes place if the pressure drops 24 millibars in 24 hours. This creates an angry storm, spinning counterclockwise and wreaking havoc on anything in its path. It looks like a hurricane on the radar, yet forms in a completely different way—and much closer to land. Due to the fact that it strengthens so fast, the result is harsher weather conditions in a shorter period of time. A polar vortex ensues and Arctic air escapes from the North Pole.

Some scientists believe that the Jet Stream, the air current that separates Arctic air from moderate and tropical temperatures, is becoming unstable. It is strong when temperatures on either side are very dissimilar, but as they start to equalize due to warming of the polar ice caps, the Jet Stream is weaker, resulting in intense weather patterns.  Other scientists say that these storms help to redistribute pockets of heat and cold more evenly around the globe. 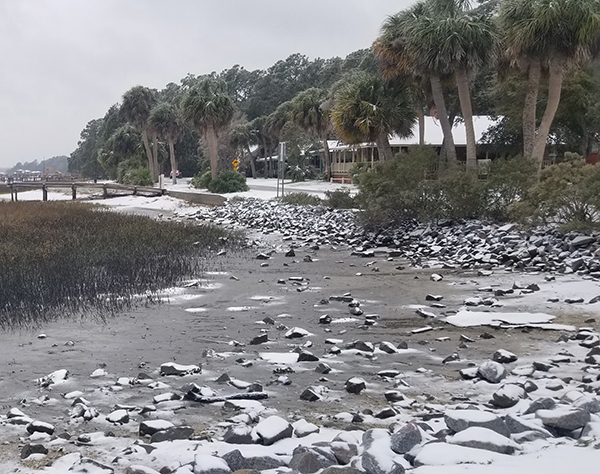 In recent years, we have experienced average rainfall amounts, but they are “rain bombs”. Rain bombs are large amounts of rainfall in a short amount of time with longer intervals between storms.

“Don’t confuse weather—which is a few days or weeks in one region— with climate, which is years and decades and global,” said Jason Furtado, a University of Oklahoma meteorology professor. “Weather is like a person’s mood, which changes frequently. Climate is like someone’s personality, which is more long-term.” Yet, your mood can be a reflection of your personality.  Our planet is dynamic. We cannot expect it to stay the same when we are changing the landscape so rapidly.

Being informed about the subject is the least we can do.

Participating in environmentally sustainable programs can be your contribution to reducing waste in landfills. I think of these small efforts as taking a little load off a planet. Every little bit counts.

Reports of iguanas falling from trees and hundreds of sea turtles washing up cold stunned were not encouraging. However, only one sea turtle and one manatee succumbed to cold water temperatures dipping to 38 degrees in Beaufort County.  Several spotted sea trout died due to the extended cold snap. On the plus side, palmetto bugs took a hit.