This has been a milestone “lighthouse year” for us at Palmetto Dunes.

The Hilton Head Rear Range Lighthouse — overlooking the Arthur Hills Golf Course in the Leamington community of Palmetto Dunes Oceanfront Resort was recently extensively restored for a second time since 1985.Featured on the National Register of Historic Places and part of the Inventory of Historic Light Stations, our lighthouse occupies a unique place in Hilton Head Island history.

One of only a handful of surviving lighthouses in South Carolina, the Hilton Head Rear Range Lighthouse is Hilton Head Island’s only historic lighthouse. The distinctive structure was built between 1879 and 1880 as part of a larger system of navigation lights guiding ships into Port Royal Sound. Congress authorized $40,000 for the construction of the complex. A cast-iron skeleton tower built about a mile inland on six concrete piers, the lighthouse stands 92 feet tall and was activated in 1880. Light from the structure was visible from 15 miles away.

In 1985, Greenwood Communities and Resorts, the parent company of Palmetto Dunes, refurbished the lighthouse.

They restored the cistern and oil house — installed a decorative sodium vapor optic —and opened the grounds to the public. On December 12, 1985, the Hilton Head Rear Range Lighthouse was added to the National Register of Historic Places. It serves as a popular Palmetto Dunes landmark and visitor destination ever since.

Now, the Hilton Head Rear Range Lighthouse has been renovated again, including the addition of a new cedar shingle roof, which was stained, replacement of 360-degree observation deck boards and structural wood areas, cleaning and treating of the interior, cleaning of the exterior, and the structure was painted with an oil-based, marine-grade paint. In addition, the windows and doors were replaced and painted in a “Charleston Green,” while overgrown foliage around the lighthouse was removed, and more.

Since its recent renovation, the lighthouse has garnered local, regional and industry-wide media coverage.

In addition, the Leamington Live Oak stands close to the Hilton Head Rear Range Lighthouse. It provides a magnificent backdrop for the 15th green of the Arthur Hills Golf Course. The tree stands approximately 70 feet tall and has a canopy that spreads across 150 feet. With a diameter of about 9 feet, calculations estimate the tree’s age to be between 435 to 450 years old. A 2019 survey report recognizes it as one of Hilton Head Island’s oldest living trees. 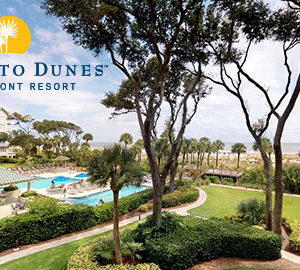 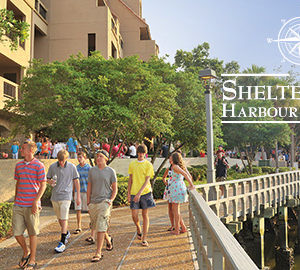 A number of interesting ghost stories and legends surround this historic lighthouse.

In 1898, a major hurricane lashed the South Carolina coast. Determined to keep the light burning, lighthouse keeper Adam Fripp died of a heart attack during the storm. At Fripp’s urging, his 21-year-old daughter, Caroline, kept the navigational light burning. But she passed away a few weeks later from exhaustion. Her ghost in a long blue dress on dark, rainy nights supposedly haunts the area.

The lighthouse, which originally included a wooden exterior, was deactivated in 1932. During World War II, however, the structure served as an important lookout tower for enemy ships.  It anchored Camp McDougal, a network of U.S. Marine temporary barracks and ammunition sheds. Gun emplacements and searchlights were established on the nearby beach. Marines were taught to use naval guns, called “Big Betsy,” as well as .30 and .50 caliber machine guns, and practiced firing these weapons into the Atlantic.

There’s a lot to love about the lighthouse in Palmetto Dunes — particularly this National Lighthouse Day!

For historical photos and documents, an extensive history and information on visiting the Hilton Head’s Rear Range Lighthouse in Palmetto Dunes, visit www.hiltonheadlighthouse.com. And join us on Facebook at www.facebook.com/thehiltonheadlighthouse.