The American Oystercatcher is named for their love of feasting on oysters, mussels and clams. 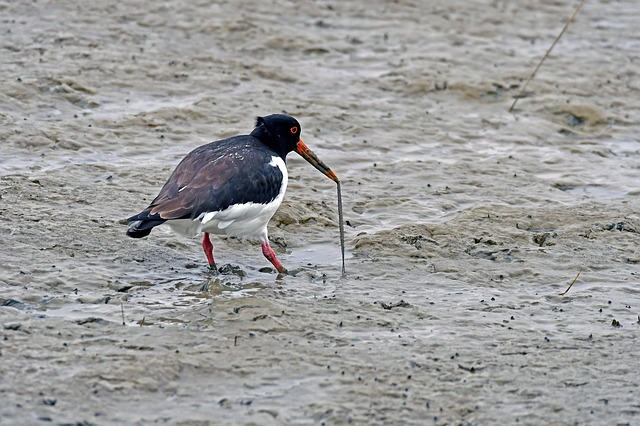 Their beaks are specially designed to pry open bivalves and then sever the muscles that clamps the mollusk shut. Once the muscle is detached, the birds are able to suck the animal out of its shell. However, this operation can be a dangerous endeavor for young oystercatchers. If the muscle is not severed, the mollusk will shut, trapping the oystercatcher and drowning it in the incoming tide.

Adults may also use their beaks as a hammer to break apart mollusk shells. These opportunistic creatures may also prey on crustaceans, insects, jellyfish and even small fish. Oystercatchers will reach breading maturity by the age of 3. They will then choose a mate for life.

At low tide, oystercatchers forage around oyster beds and other intertidal areas.

The American Oystercatcher (haematopus palliates) is an easily-identifiable shore bird. Oystercatchers tend to be two feet in length and sport a three-foot wing span. It typically has a white belly, black head and dark brown back. Its bright orange/red beak is the bird’s most distinguishing feature. Juveniles usually have dark brown beaks that change color upon maturity. On Hilton Head Island, oystercatchers probe the mud in our saltwater estuary systems around low tide. At high tide, they walk or run around shell beds and beaches.

In the early spring, the males and females make their nests on banks above the high tide water line.

Their nests can be laid along shell mounds, beach fronts and marshes. Oystercatchers typically lay two to four eggs in shallow depressions. Communal care for eggs is common in some groups of oystercatchers. One male and two females may tend up to six eggs in two different nests. In either case, the eggs will incubate for about a month before hatching.

Chicks will learn how to fly within 35 days. They will stay with their parents for up to two months, relying on them for food. Young oystercatchers tend to flock together once they have left their parents.

The total population of the American Oystercatcher is only about 72,000.

In total, there are less than 10,000 of these birds in the U.S. today. In the early 1900s, egg harvesting and plume hunting nearly brought these animals to extinction. The Migratory Bird Act Treaty protected these animals from such hunting. The birds have been able to make a comeback, but have not reached their original range or population.

Today, a number of factors affect both nesting space as well as a lack of reproduction in the species. Oceanfront development, avian and mammalian predation and over washes from tides and boats affect them. Human disturbances have also caused a serious decline in oystercatcher populations. However, these impressive birds live year-round in the Lowcountry in relatively healthy numbers. Keep your eyes open for this signature shore bird.