One might answer summer. Or Legos. Yes, you read that correctly: Legos, those building blocks from your childhood, the ones kids can use to create almost anything imaginable. Legos and snow cones are truly in a working relationship on Hilton Head Island, thanks to Chris Sudduth. 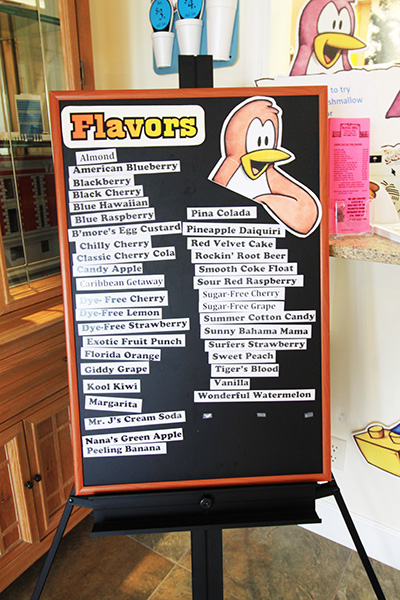 Tucked away in Palmetto Bay Marina, Sudduth’s hobby and dessert preference collided when he opened Sno Cones by Chris during the summer of 2013. Here customers will find a collection of more than 45 Lego sculptures and mosaics to view while deciding which of the 35 different flavors of snow cones to choose from.

“There are 18 or 19 dessert places on Hilton Head, but I’m the exception,” Sudduth explained. “Everyone else does ice cream, gelato or sorbet—they’re all at the other end of the spectrum; I’m unique!”

Sudduth started out with about six core snow cone flavors.

Since has expanded to include everything from blue raspberry and cotton candy (the most popular ones) to piña colada, root beer float, green apple and creamsicle, which are all made by combining two or flavors.

But success didn’t happen overnight. In fact, he first started selling snow cones out of the back of his truck (and there wasn’t any room for Legos there). Both of his collections—of Legos and snow cones—have grown significantly since Sudduth relocated to the Lowcountry from his family home in Maryland seven years ago. He asked himself questions—What should he do with his life? Where should he go?—but he found clarity through his family.

“There are only so many opportunities you have in your life to do something unique,” he remembered his mom and sister telling him. “And now is the time to do it.”

But he still didn’t know what to focus his time and energy on. That is, until his mom and sister told him Hilton Head Island didn’t have any snowball shops or stands, places he and his sis frequented quite often back in their hometown. It was their encouragement that also prompted him to show off some of his sculpture work…with Legos.

“Why not put two of my favorite things into one?”

That’s why, among all the multi-color and differently-sized Lego sculptures—the Titanic, Statue of Liberty, La Tour Eiffel, Empire State Building, dinosaurs, flowers and animals—and mosaics—of a lion and tiger, as well as Audrey Hepburn and Marilyn Monroe—shop-goers will encounter one of his most prized pieces, a mosaic of his niece and nephew. Amid all of the random creations, a few custom pieces stand out.

Although they are not the only ones he has made pieces for. He created a mosaic of the Fat Babies Pizza logo for the owners (purchased as a birthday present).

Sudduth will even make mosaics for his customers.

They just have to supply him with the image. He pixelates the image using a program on his computer to create a kind of map for him to follow. A 48”x48” piece runs between $150 to $170 and the prices vary by size.

Chris Sudduth enjoys the love his customers have for his works—both of the shaved ice and Lego variety—and believes that if you love what you do, you’re never going to work a day in your life, no matter whether you work in an office doing design work, a shop selling clothing or food or outdoors fishing and working in water sports.

He looks forward to the future of his business as he continues to grow his collection of flavors and art. He enjoys  seeing how his works touch people’s lives. “The biggest compliment I’ve received is when a family first comes in early in the week. Then I see them back two or three times in the course of that week,” Sudduth revealed. “There’s, I don’t know, 300 restaurants to choose from and they pick me to come back to—that means something.”