Weeks of cold bad weather brought on a case of cabin fever, so a prediction of calm seas left me with no choice but to head off the beach and fish for the wily sheepshead. 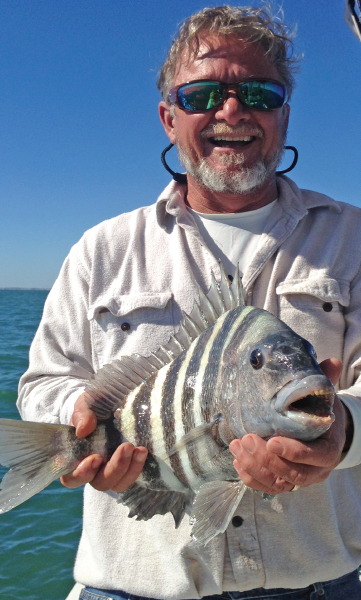 The dilemma at hand was a serious lack of fiddler crabs, the bait of choice for the sheepshead. Captain Herb Rennard of Palmetto Bluff and I had discussed stories of success with clams and mussels, so we loaded up on those. To make it a complete busman’s holiday, we completed the crew with Captain Bryan Benson of the Bayrunner and Captain Ben Ranney of the Finatic.

Arriving at the reef, we dropped the clams down onto the structure with much anticipation.

Nothing happened immediately, but Captain Ben soon announced a solid hookup with a good-sized fish. A few minutes into the fight it became apparent that it was no sheepie, but a full-grown fish nonetheless. I hooked up, not long after, to something large myself, but like Captain Ben’s it didn’t display the classic up-and-down seesaw battle—the trademark sheepshead fight. Soon we had a pair of 20- to 25-pound black drum on board, too big to keep.

The main goal was table fare (and I rank these fish at the top), so we moved to another spot on the reef. After catching small sea bass, ringtails and other assorted small reef fish at that spot and the next, but no sheepshead, we decided that the big black drum were at least top-notch sport and resolved to head back to the original spot. We weren’t there minutes before Captain Herb tied into a nice one pushing 30 pounds. The bite was still on and action steady.

Captain Bryan hooked up and the fish made a searing run that almost spooled him. Muttering “probably a stingray,” he fought and the battle raged for a good 15 to 20 minutes, only to culminate in loud hoops and hollers when it broke the surface. The black drum was pushing 60 pounds, if not more! We lost several more this size to the reef and ended up with a dozen or more between 30 and 50 pounds.

Now there are two theories in regard to bait.

One prescribes to the size of the bait matching the fish. The other is “you can catch elephants on peanuts.” The small bits of clams we were fishing with lent credence to the latter. I have, at this time of year, crushed the big black drum on tiny fiddlers. I might add that these fish were caught on light tackle trout rods with small 2/0 hooks.

We left the reef with nothing for dinner, but satisfyingly tired. As for the sheepshead, next time we will bring fiddlers. If you want to catch some, March is the time!