Hilton Head was named one of the best biking communities in the United States, earning the gold award from the League of American Bicyclists.

Hilton Head was one of only four communities across the country to be promoted from one level to another by using criteria previous set up by the League.

The League of American Bicyclists aims to help communities across America make the roads safer and more enjoyable for those traveling via bike for pleasure or work. With many education programs the League also aims to educate bikers and motorists on how to keep each other safe, while still obeying the rules of the road. The League began in the early 1880s as a movement to have roads paved for high tower bicycles led by the “Wheelmen.”

With over 110 miles of biking paths it only makes sense that Hilton Head would be a top biking destination.

While 60 miles of those are public and 50 private, collectively they span almost 35 miles winding around parks and beside lagoons and wrapping around the island, making the paths one of the most accessible roadways here on the island. This past summer, electric bikes even made their way to Hilton Head Island.

Hilton Head prides itself on bike safety education. Community forums help teach people about bike safety. Almost everyone on Hilton Head knows the basic rules of how to ride along a bike path.

Many of the paths following major stretches of roads, such as William Hilton Parkway.

Bikers should ride with traffic, never against it. Because bikes are considered vehicles of the road, it is important that the follow the same traffic laws and can be sited for some of the same violations. But while bikes are considered vehicles, sometimes it is hard for motorists to see them, especially when in traffic. Bikers are encouraged to ride along the bike path if there is one available.

It is also important that all bikers, pedestrians and motorists obey the pathway markings.

Technically, bikes have the right over motorists. But, the likelihood of them seeing you before an accident occurs is slim, especially in an intersection or crosswalk. Remember that each of the markings on the bike path are the same in the road. If you have a double line, do not pass. But if you have a single line it is just stating that the path goes two ways. Some paths along the island are one way and you can be stopped if going the wrong direction.

On the island, safety is of the utmost importance, and helmets and encouraged. While it may feel like you look silly, remember there is nothing silly about hurting yourself.

For more about cycling around the island, click here and find out “What you need to know about Biking on Hilton Head.” 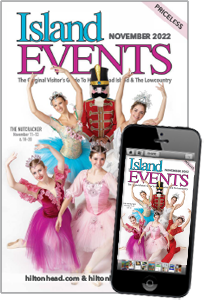