Rich in history and charm, Hilton Head’s cemeteries have plenty of stories to tell. 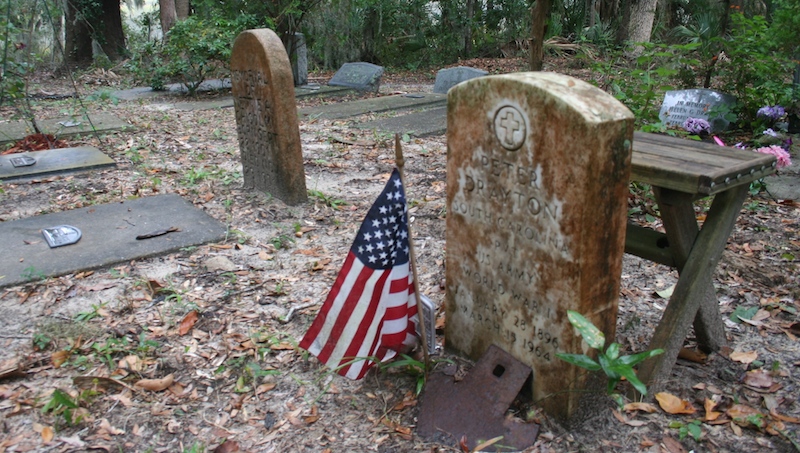 Old cemeteries can be found all over Hilton Head Island. Zion Cemetery lies on the corner of Matthews and William Hilton Parkway. Drayton Cemetery rests next to Whole Foods inside of Shelter Cove Plaza. Braddock’s Point overlooks Calibouge Sound and Six Oaks Memorial lies smack dab in the middle of The Sea Pines Resort. While each of these cemeteries are visible from the road, many others were forgotten and neglected. In some instances, marshes took over cemeteries, leaving those buried in the ground in a dark and murky grave.

“Unfortunately I don’t think we’ll ever know all the grave sites on the island,” said Grace Cordial, the head of District Collection for the Beaufort County Libraries.

Hilton Head has been known and fought over since the discovery of the new world.

The Spanish, French, English and the Scots all fought for the rights to call this beautiful island their own. Eventually, many of those who fought for Hilton Head found it difficult to develop in the marsh of the Island and moved inland toward modern day Bluffton.

As Bluffton grew, more families found the need for their own land. Hilton Head Island became the place for cotton and rice farming. Its land and the humidity and boggy weather was ideal for growing these crops. Soon, plantations began to spring up across the Island. Being in the South, the slave trade boomed and each plantation had their own set of slaves, as well as slave graveyards.

“People would bury their loved ones together on a plot of land and not mark it since they didn’t have the means to,” said Cordial. “Many of them would use wood which would have disintegrated by now.”

Many of the cemeteries were divided based on class and race.

White cemeteries were usually well kept, organized and family owned with large headstones and many of the caskets were buried in blocks of tabby, a mixture of burnt oyster shells, water, sand and ash, to help keep the dead from floating away in the event of mass flooding on the Island. These cemeteries are still well preserved today, and some, like the Amelia-White-Graham Cemetery, are still in use with some bodies buried as recently as 2013.

One of the most famous of these cemeteries is located where the Zion Chapel of Ease Church was once located. The church, the Episcopal Church Off Ease of St. Luke’s Parish, was originally built in 1786. Four graves of men who fought in the local militia during the revolutionary war lie here. Unfortunately, the chapel was abandoned and consequently destroyed in 1868, leaving nothing but a mausoleum and cemetery. Tours are conducted through the Coastal Discovery Museum conducts tours of the church ruins. The tours offer an in-depth description of those buried in the cemetery.

African American cemeteries, on the other hand, were usually crude, unkempt and without markings.

Many of the graves had wooden markings, or handmade ones with engravings drawn by hand in the wet tabby. These cemeteries began as slave graveyards. Many of the cemeteries that survived through the centuries and are still in use. Braddock’s Point Cemetery located within Sea Pines that overlooks the sea was originally a Gullah Cemetery. While it had been abandoned for years, it is now fully restored and many of the Gullah death rituals are still practiced here. Oddly enough, a visitor who spent his winters down south, noticed the disheveled, unkempt graveyard.

While many of the cemeteries on Hilton Head Island may catch our attention as we cruise past on our way to the beach, we don’t know much of how they came to be, or who resides in them. All that remains are the markings of those names buried under the old oak trees, Spanish moss dripping above them, sweltering in the humid Hilton Head weather. We may never learn how many of these people lived, or even where they are laid to rest.