The beaches beckon and the water welcomes wanderers, explorers, thrill-seekers, fishers, families and friends. Many leave and find themselves coming back again and again. Such is the case with so many individuals who have dubbed Hilton Head their annual vacation spot, but it’s also true of those who’ve lived here and wandered away.

Jeff Gale found himself in this position after relocating to Boston with his wife to pursue a corporate career. His parents originally discovered Hilton Head Island in the 1990s and moved here from their home in Key West, where they owned a boating business. They opened a fishing business on Hilton Head Island and all throughout high school and college, Jeff helped his dad out on the water, but upon graduating college in Charleston, he decided to moved up North. However, the coast kept calling and Jeff found himself missing the salty breezes and sandy shores, shrimp season and his Lowcountry life.

The boat of choice for his excursions? CraigCats—small, compact two-seater catamaran speedboats made in Orlando and well-known in much of Florida.

“They are ultra-low to the ground; you can touch the water from driving it. It feels a lot like a jeep without doors on when you’re going and it rides similar to a waverunner, but with a lot more luxury,” Jeff said.

With brand new 2017 models that go up to speeds of 30 mph, these boats allow for a much more exiting and intimate experience on the water. Passengers are not high up surrounded by the tall walls of a boat, but floating inches above the waves similar to a kayak, but going at much faster speeds.

“The great thing about this is it gives you the ability to get on the water and drive your own boat. You’re not on a waverunner, so you’re not limited to staying in one little area,” he said.

Throughout the summer, Island Skiff will offer four tours per day.

Each excursion is two-and-a-half hours long and costs $125 for adults and $100 for children 12 years and under. The trips covers about 25 miles around Hilton Head Island, Bluffton and Daufuskie Island and includes few scheduled stops to discuss safety precautions when entering different waterways, take photos and see dolphins and other wildlife. 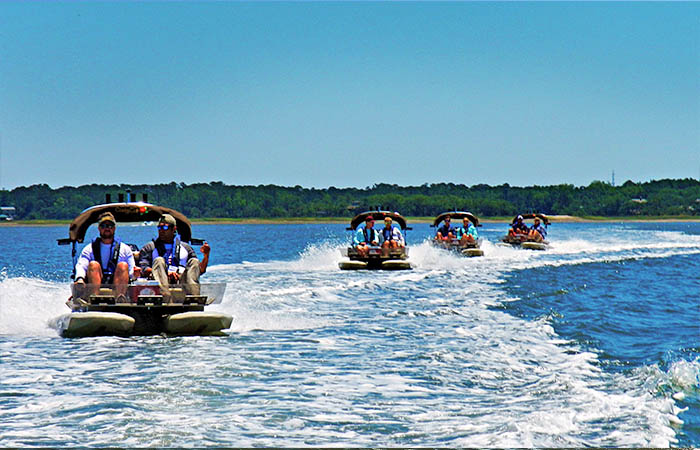 “It shows the hidden beauty of Hilton Head and really what brings people to the Island,” he said. “Broad Creek is called Dolphin Alley for a reason. There’s a ton of local dolphins that live there. They often poke their heads up so you get to stop the boat and see them.”

This allows up to eight people per outing, plus an addition boat with a professional guide who leads the tour. Each CraigCat offers a small cooler with ice and water for guests.

Jeff recommends arriving 30 minutes before the trip for registration. Orientation starts prior to the trip. Jeff and his staff show how to operate a CraigCat before customers get in. They demonstrate how to use throttle and steer the boat. Everyone is equipped with a life vest that auto-deploys if someone falls into the water. They recommend wearing boat shoes, strap sandals or flip flops with beachwear and light cover-ups. Expect to get splashed.

“It’s the enjoyment of being on the water,” said Jeff. He shares his passion for this place with guests he gets show guide around the coast he calls home.

Calling (843) 816-5976 for reservations. Drivers must be 18 years old and passengers must be at least five years. For more information about these exciting eco-tours out of Broad Creek Marina, located at 18 Simmons Road or islandskifftours.com.